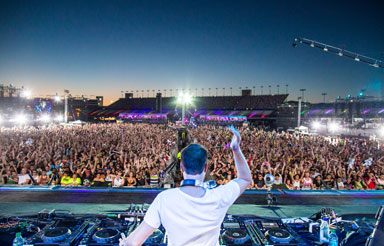 Marketing Music in the Social Age:
Ever since Napster, itself an early social network, turned the business model of the music industry on its ear, music marketers have had to consider a dynamic shift on how to remain viable. In the past, sales and profits were tied to record sales, but they can no longer use such a model with the availability of pirated downloads and peer file sharing. It’s becoming clear that ‘live events’ and ‘brand partnerships’ are needed in order to profit. One genre that seems to be getting it right, by embracing social engagement, is Electronic Dance Music. Colloquially known as EDM, the scene has been exploding lately due to a younger more connected audience and heavy social engagement by marketers, artists and fans alike.

“You can reblog people’s music and follow individuals on it, I think the dance music industry has geared itself towards a business model where live performance is really how a lot of these artists are making their money.” – Sami Yenigun a Washington D.C.-based EDM DJ

More Social = More Fans
The EDM music scene has seen large growth in the past few years and reports indicate
a staggering audience of over 3.5 million people between the ages of 18-35.
This demographic itself is considered “young, highly inclined toward purchase, technologically facile, (and) with significant disposable income” making some
to claim that EDM is the most marketable music in history. 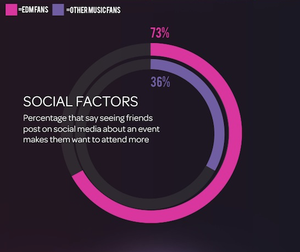 “EDM fans are twice as likely as other music fans to want to attend an event when their friends post on Social Media; Over half of fans revealed that they would pay for live streaming of an EDM concert”

Fans of electronic dance music are very social consumers before, during and after a concert, according to recent survey data collected by online ticketer Eventbrite.

Partnering with Brands:
All this exposure to an attentive social media driven fan base is starting to be a boon for marketers, especially when they tie in brand names with EDM acts. They can engage their audiences and connect with fans, announce shows and line-ups, post photos in real time and hold contests and giveaways. 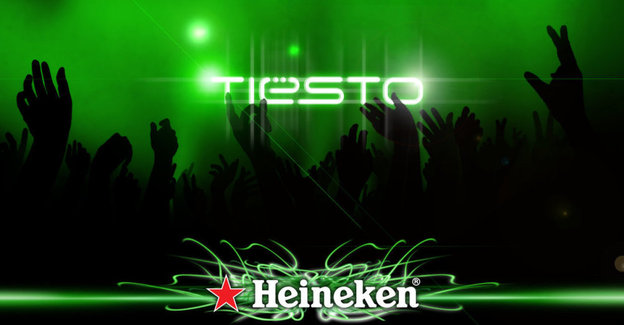 This extensive coverage of EDM on social networks translates into higher ticket sales
and more exposure for brands that partner with electronic acts. Tiesto, an EDM deejay,
who recently passed 7 million likes on Facebook, partners with beer maker Heineken for world tours and events. Tiësto has had a formal relationship with Heineken since 2009 and they pay to produce his show, adding to his bottom-line, and he in turn directs fans to their product via links on his page. “There’s a variety of advertisements that are leveraged against each page that you see on Facebook,” says Toby Benson, Tiesto’s Director of digital marketing. “So if you click around to say four or five different photographs on Tiësto’s page, you will be served four or five different advertisements.”
It isn’t a stretch to consider that if a fan has ‘liked’ an artist’s Facebook page, they may have also Tweeted or blogged that fact with their friends online.

EDM Sales:
The use of social marketing to music fans not only drives profit through the branded partnerships, but it also changes the way consumers can access and purchase music. The Facebook and Twitter networks give EMD artists a way to easily share new tunes and announce upcoming performances. Sites like YouTube and Soundcloud give fans a chance to preview and stream tracks, funneling fans further to sites like iTunes and Beatport for actual music sales. 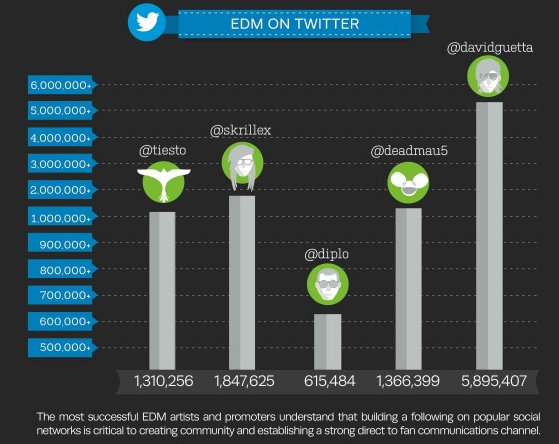 A Raving Social Success:
Electronic Dance Music continues to take the world by storm, and clearly its success is improved by its social media exposure. The EDM market is estimated to be a $15 to $20 billion global industry. With an increased amount of fans comes more eyeballs on ads, and related social marketing properties. Music marketers should continue to see their efforts in associating with EDM artists result in success for the foreseeable future, and perhaps learn lessons that can be translated into other genres of music.

Submitted by: Dave Mazur – SMBP Student, University of Waterloo. If you have concerns as to the accuracy of anything posted on this site, please send your concerns to Peter Carr, Program Director, Social Media for Business Performance.