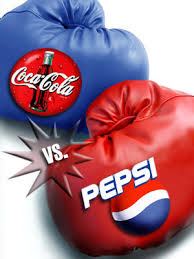 As a self-proclaimed Diet Coke addict, I felt it only natural to post at least once about my all-time favourite treat.  The challenge was out there, and most cannot tell the difference between Pepsi and Coke, but I must say I am one of those people who can really taste the difference!  This time around, it is not the taste that has me looking at the differences between these two soft drink competitors.  This time, I focused on metrics, specifically Social Media Metrics, and yet again, Coca-Cola seems to be a front runner.

According to a post by Nick Faber, Pepsi has exceeded its followers compared to Coca-Cola on Twitter, but Coca-Cola is dominating in most other aspects of Social Media Metrics.  (Coke crushes Pepsi in most social media metrics) Nick also mentions that Coca-Cola is engaging with customers in an obvious and simple way that clearly works.  “Two years ago, Coke abandoned efforts to build its own social infrastructure “in favor of approaching customers at the places they already hang out, like Facebook and YouTube.” (Coke crushes Pepsi in most social media metrics)

Once their customers were established, the trick to meeting and exceeding Social Media Metric goals has been to keep those customers engaged.  This appears to be where Coca-Cola is once again, winning!  It is clearly not all the amount of followers you have, but how you engage those followers.  In PEPSI vs. COCA-COLA Socialbaker´s Guide to Twitter Benchmarking, the case study follows both Pepsi and Coca-Cola and their progress on Twitter.  Coca-Cola knows how to engage its Followers better than Pepsi! It nearly reached a 0. 1% Average Engagement Rate on April 30th and June 6th with simple Tweets like: “A great week starts with a Coke and a smile” (527 retweets) or “Sometimes you just feel like dancing. RT if you agree” (494 retweets). (PEPSI vs. COCA-COLA Socialbaker´s Guide to Twitter Benchmarking)

Engagement is key when it comes to Social Media and the success of meeting your metric goals.  Coca-Cola is very focused on Facebook and it is evident when you compare the total followers for each company page.  Coca-Cola currently has 75,149,476 followers on Facebook, and Pepsi is miles behind with 28,776,425 followers.  As I have heard, over and over, it is not about the amount of followers but how you engage those who follow you.  Social Bakers review on the two companies and their engagement on Facebook notes, however that, “in case of interactions, Coca-Cola has an overall engagement rate of 0.1%, compared to Pepsi’s 0.06%. This means people clicked the Like or Comment buttons on average more times compared to the number of fans” (Pepsi Vs Coke on Facebook).   One thing to keep in mind is, “the more fans that click “like” and comment, the more likely your future updates are to be seen in their News Feed, dramatically increasing your actual Facebook audience” (Jay Baer, 6 Critically Undervalued Social Media Success Metrics).  This is one area where Coca-Cola is winning the soft drink battle.

The ultimate indicator of success is up to you and the goals you have set.  “The social media metrics that matter most are those that tell you how successful your campaigns are at meeting your specific goals — which could be anything from becoming better known in the marketplace to engaging with influencers to selling more products” (Courtney Seiter, The Minimalist’s Guide To Social Media Metrics).  If Pepsi and Coca-Cola are both meeting their own Social Media Metric goals, then it is safe to say they are both giving a fair fight in the battle for social media market share.

Regardless of who is doing better with their Social Media goals, I still prefer Coke.   I can taste the difference!