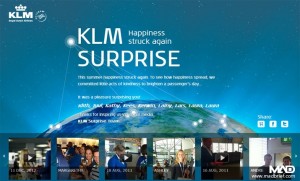 It may seem a little odd at first but if you’ve ever spent hours sitting at airport, it could be a welcomed surprise. No matter how exciting your trip may be, the wait at the airport is often dull. Many would agree that airport people watching, outrageously priced food and coffee and Duty-Free shopping has lack-lustre appeal after an hour or two.

Unlike many other airlines, KLM wanted to see if they could improve their customers’ travelling experiences prior to take-off.  KLM offers a brand promise of “journeys of inspiration”. At the time, they wanted to see how they could use social media to connect with their passengers on a more “intimate” level and bring this brand promise to life.

For 3 weeks, the KLM Surprise team was posted at Schiphol Amsterdam Airport. The team would filter through Foursquare or Twitter daily, looking for KLM passengers who checked into these social media sites at the airport.

After identifying a KLM passenger, the KLM Surprise team would filter (discreetly) through that passenger’s social media accounts and try to get to “know” them, find out where they were going and what they planned on doing. They would follow their conversation with friends. Once they had enough information, they would create profile for the passenger and would purchase a small, personalized gift. The team would then track down the passenger in the airport to deliver it to them.

Once they tracked down the passenger, the KLM Surprise Team would present them with a gift and give them their best wishes for their trip. They also took the time to take photos of the people they have surprised and post them to the KLM Facebook page.

Initially, the experiment was positively received by passengers. Many re-tweeted and thanked KLM for their experiences.

Great surprising u! MT @tomiahonen Thanks #klm for noticing someone is Twittering about you & for so kindly surprising a tired traveller!

Through 28 passenger interactions, KLM generated more than 1,000,000 impressions on Twitter alone. KLM Surprise campaign video was posted on many social media blogs and featured on BBC and The Next Web on how to be successfully relevant with social media.

KLM thought differently and did their research. They connected with their passengers and learned what they wanted through social media. After understanding what their passengers wanted, they took advantage of it and got positive feedback.

The takeaway? Get to know your passengers and thank them for their business in small, personal ways.

These random acts of ‘surprise’ paid off for KLM in the form of 1,000,000 impressions on Twitter and 5000 new friends on Facebook.