Social media metrics can connect social media marketing to sales and ROI, but what about social activity that can’t be measured?

In May of this year, Buzzfeed posted an analysis of traffic to its network, noting an increase of 25 per cent from social media platforms like Facebook, Twitter and Pinterest, and 52 per cent from sources described as “dark social.”

First, what is dark social?

Alexis Madrigal coined the term just last year in her article for The Atlantic, Dark Social: We Have the Whole History of Web Wrong, using it to describe the “vast trove of social traffic essentially invisible to most analytics programs.” 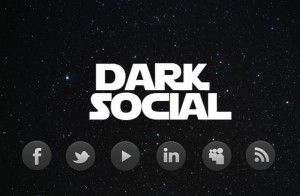 Think about how you share information online. Do you post links to your Facebook page or Twitter feed? Do you email or text links to family and friends? The latter is an example of dark social.

Madrigal describes it this way: “[Dark social] shows up variously in programs as ‘direct’ or ‘typed/bookmarked’ traffic, which implies to many site owners that you actually have a bookmark or typed in www.theatlantic.com into your browser. But that’s not actually what’s happening a lot of the time. Most of the time, someone Gchatted someone a link, or it came in on a big email distribution list, or your dad sent it to you.”

In other words, we can’t see where this traffic comes from, so it’s dark.

Second, why is dark social traffic so high?

Madrigal draws on stats generated for traffic to The Atlantic site – while 21.6 per cent of this traffic came from Facebook and 11.2 per cent from Twitter, an overwhelming 56.5 per cent came from dark social. This distribution appears in other contexts as well. According to Madrigal, across a broader set of sites, nearly 69 per cent of social referrals were dark. The Buzzfeed data mentioned above also fits with this pattern.

Why is there such a gap? Since the introduction of Facebook and Twitter in the mid-2000s, social media has been king, but Lisa-Marie Leitner cautions against understanding “social networks” and the “social web” as synonymous terms. “Other channels that make the web social, like email, chat rooms and instant messaging… don’t get the attention they should,” she points out, “because they are considered old, outdated or just not that important. What a fatal assumption!”

Finally, what does this tell us?

Are you more likely to click on a link in your Facebook newsfeed or in an email from a friend? The key issue here is trust. Leitner argues for the power of dark social links. “In a time where we connect with everyone we’ve ever met on social networks,” she argues, “a link from a LinkedIn contact is less valuable to us than a link in a Skype message from a real friend.” We trust people we actually know, and we’re more likely to check out content directed to us personally.

This isn’t to say that dark social is more valuable than social media. Social media allows a company to expand its online reach, but why stop there? Matt Wesson points out that “including a ‘share via email’ option whenever you make sharing options available can help increase dark social shares, ultimately increasing your exposure.”

Sometimes what can’t be measured can give us valuable information, too.

Aswini Anburajan, Where Did All the Search Traffic Go?
Lisa-Marie Leitner, Dark Social – The majority of your social traffic is invisible
Alexis Madrigal, Dark Social: We Have the Whole History of Web Wrong
Matt Wesson, Shedding some light on the concept of dark social

Submitted by: Vanessa Parks, University of Waterloo, SMBP student. To contact the author of this post, email vparks25@gmail.com.