How do you view Pinterest? The everyday user may see it as a tool where they can post the hottest fashion trends, pin items that they’d consider for purchase or share their favourite things, people and places. However, Nordstrom’s social media manager, Bryan Galipeau sees Pinterest as a great opportunity; he believes that Pinterest is “the world’s biggest wish-list.” A great place for Nordstrom learn more about their customers’ interests.

Nordstrom is engaged with a large community on Pinterest that they can easily boast about. They have over 4.4 million customers following their board that is updated daily. Customers can peruse over 65 different boards organized by Nordstrom’s social media team but it doesn’t end there. If you head over to Nordstrom’s retail site, most items available for retail give the customer the option to pin the item to their own personal Pinterest board to review at a later date.

Nordstrom also tracks the information being pinned by its followers. On a weekly basis, their Social Media team reviews what their customers are trending on Pinterest in various areas such as women’s clothing, shoes and accessories.

In 13 different Nordstrom locations, they have taken the Pinterest integration one-step further. These “most-pinned” items (or similar offerings) are identified in-store; tagged with a red ‘P’ to showcase these hot, online trends amongst in-store shoppers. 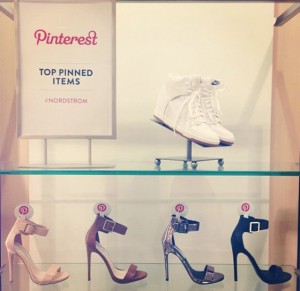 Nordstrom spokesman Colin Johnson remarks that, “It’s one thing to say: ‘Hey, this is really popular on Pinterest.’ But, it is another thing, to take it to the next step and say: ‘Not only is this the most popular on Pinterest, but this is the most relevant selection that we have for you in this store at this time.”

Nordstrom also uses Pinterest to manage inventory in their stores; items that are “most-pinned” are kept in stock and Nordstrom spokesperson, Colin Johnson recognizes that these items need to stay in stock otherwise there is no purpose to pinning the items.

Nordstrom has taken Pinterest to a new level and other retail companies could learn a lot from what they have experimented with. Consider letting your customers decide and drive the trends and share this information with your other customers. This allows for a unique social media experience and may deepen loyalty with your brand.