LEGO Design by ME was a service introduced by the construction toy Lego. Launched in 2005 , before a fledgling Facebook ushered in the social media age, under the name LEGO Factory. The unique customization service allowed people to design their own Lego models using a computer aided design program, then upload them to the Lego website, share those designs and even develop their own packaging and order the sets for delivery! Consumers could make whatever they imagined on their computer. LEGO Design by Me attracted several million people each year to build a huge range of amazing creations using the LEGO Digital Designer software (LDD).

As far back as 1999, a group of visionary LEGO product developers and engineers started thinking about letting people design the product kits. They imagined people of all ages, anywhere in the world, being able create a design they could dream up, using an intuitive free online tool for digital-design. The first milestone was achieved in July 2003, when version 1.0 of LDD was released. In 2004, an online 3D Gallery went live, allowing designers to share their ideas via the Internet. By 2005, thousands of LEGO enthusiasts were designing, sharing and ordering their own custom models, and the one-millionth copy of LDD was downloaded that year.

Sounds great! But what happened?
Early in 2012, Lego decided to close their LEGO Design by Me customization service. It was rather unfortunate, but one of the reasons for the closure is that the user experience did not “live up to the quality standards that LEGO wanted”. A rather cryptic response from the company, but what it shows is an example of how allowing public networks “free reign” over product design and idea generation, can have negative implications. 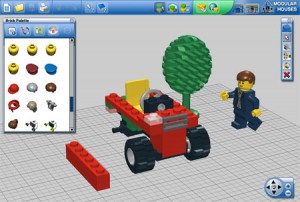 While the Design by Me system has come to an end, and may be considered a failure of a crowd source experiment, the software used to design the Lego kits is still widely available, and actually  considered a great success by many. The LDD program is a “great virtual building system”, with its “Click-Stick” method of 3D modeling, winning praise from children, parents, teachers and design enthusiasts all over the world. Custom LEGO Kits can technically still be designed, bought and shared online, but in a much more scaled back concept.

Conclusions?
Setting a time limit on social engagement could have helped, but it’s important not to let the process “fizzle out”, as was likely the case here. Too many “whackey designs”, and no real progress in the development of the Design By Me web property, left consumers with a muddled view of the brand, and no real direction for the future. Lego’s commitment to customization in the future is a good sign, and perhaps they could leverage other social media platforms towards this cause. A Facebook app, based on the LDD could be successful, or even holding contests for the best new designs, as voted by fans, have been successful approaches for other brands.