GAP opened its first doors in 1969 in San Francisco, California. In the beginning, it sold white cotton t-shirts, signature blue jeans and LPs. 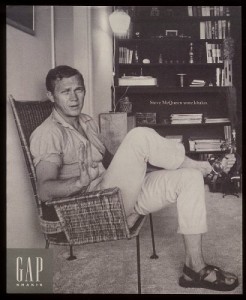 50 years later, not much has changed. Though they sell less music these days, and have injected a bit of colour into their wardrobes, Gap is still known for selling the basics, and have made billions of dollars off of denim, cotton t-shirts and cardigans. It’s what Gap is known for – selling the wardrobe essentials for men, women and children around the globe. Playing it safe and comfortable, not too casual, not too formal. 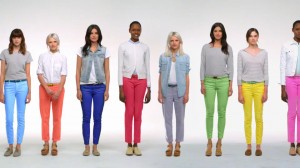 In 2010, when Gap tried to re-brand itself, it caused a major social media uproar of nightmare proportions. Within days, Google filled up with more than 28,300,000 hits on “new Gap logo”. Experts immediately started speculating whether Gap had duped us into a brilliant PR stunt, or if they were really considering replacing the iconic blue box with a less than adequate re-branded logo. The proposed logo even got it’s own (fake) Twitter account. It lasted 6 short days. 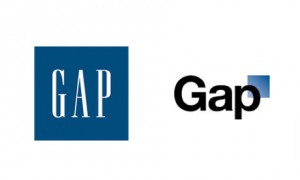 Although the new logo debuted on Gap’s website, the crowd-sourcing social media outcry began to pour in through their Facebook and Twitter accounts. The official statement that they would can the new concept and go back to the box came via their Facebook Page:

“Ok. We’ve heard loud and clear that you don’t like the new logo. We’ve learned a lot from the feedback… We only want what’s best for the brand and our customers. So instead of crowdsourcing, we’re bringing back the Blue Box tonight.”

Gap has often been accused of having a bad case of brand identity; failed ad campaigns and flops in attempt to connect with a younger, hipper crowd. This was a huge breakthrough between the brand and its consumers and in an ironically got their target markets talking about their product in a meaningful way. Maybe Gap knew exactly what it was doing after all?

Lessons for others
Front-end crowd-sourcing pays off by keeping the embarrassing parts behind closed doors (or signed NDAs). On the flip side, taking a big risk and using social media in a new way could really pay off!

Submitted by: Amanda Houseman – SMBP Student, University of Waterloo.
To contact the author of this blog post, please email housemanamanda@gmail.com