First, let me tell you what a Tough Mudder is because I didn’t know until I had a group of friends participate. A Tough Mudder is a 10-12 mile obstacle course designed by British Special Forces to test all-around strength, stamina and comraderie. Only 78 per cent of entrants finish each race, but 700,000 people have tried and also raised over five million for the Wounded Warrior Project. According to their website, the Tough Mudder is the premier adventure challenge series in the world. This isn’t an event for the faint at heart.

The Tough Mudder organization knows they are marketing to a very specific audience and decided to put the majority of their focus into Facebook to reach that audience. They had three goals in using the Facebook:

They created their page in 2010 and haven’t looked back since. On the main page they have an events tab that allows visitors to see when the upcoming events are in their area and join that events page. Events from all over the world are listed making this a truly global page. They also developed a custom tab called “Are you Mudder Ready” with a quiz people can take to find out if they are prepared for the course and enables them to share the results with their friends on Facebook. 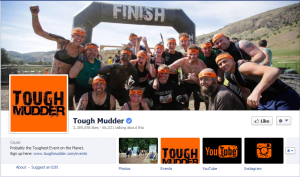 To increase engagement on their pages they post photos and stories about people with interesting stories who made it to the “Tough Mudder Hall of Fame.” They also post comments with fill in the blank sentences like “The best part of the Tough Mudder is _______” for people to answer and have caption contests for photos.

They use the advertising feature on Facebook to generate awareness and increase event registration by:

The results for Tough Mudder have been great. Since they started using Facebook as their primary marketing destination, they have seen sales increase 24 times over. They see a regular return of 5-10 times what they spend. Their click-through rate is 5-8 times higher on ads in the news feed than traditional ad displays. They have increased their fan base from 200,000 to over 2.5 million in the past two year, which they attribute to Facebook ads. In addition to that, 20 per cent of Tough Mudder participants say they were influenced to sign up for the event through Facebook ads (according to a Tough Mudder conducted survey).

If you’re going to focus on one tool, really focus on it. By putting all their efforts into Facebook marketing campaign the Tough Mudder organization really knows their efforts are working. By taking part in a number of Facebook’s beta advertising programs they get to be the first to try new things and know whether those tools will work for them in the long run. Being open to the beta advertising shows  Tough Mudder is dedicated to Facebook marketing and all that has to offer. They have made their Facebook page the place to go for contestants and possible contestants.