Social media is by definition, social.  So its no surprise that the line between customer and friend can easily blur and shift.   The rise of Twitter and Facebook have produced the online social butterfly who’s (at first, unofficial)  invite you out to a night club or event to join them for an evening of entertainment as friends.  But a time goes on, and the owner or promoter of a venue realize you have a lot of friends, this role turns into more then just a few drinks at the bar from the owner as a “thank you” for being a loyal customer. 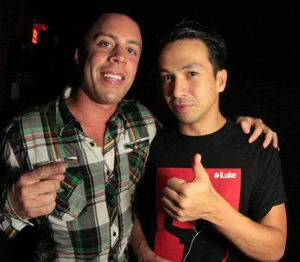 Mitch Ross works with Provoke, a very active promotions and event agency in Toronto, Canada.  “With all the forms of social media it is almost a full time job to keep up to speed with everything.”  To him, it’s become a fine line to distinguish who is a true friend, and who you must be “friends” with to create a business connection with. The result is a hybrid use of social media, to cultivate “friends” who will join you at the establishment you promote for.

In the April 2012 edition of Journal of Public Relations Research, Kellehera & Sweetserb examine the interaction between University students and social media, with a key concluding point being that the current nightclub generation grew up using technology as a communication tool and is therefor very comfortable interacting online with individuals or group who they rarely see in person.  The result is promoters and owners using social media as their primary customer engagement tool.

In the past 5 years, promotions companies are no longer sending people to stand outside of the club and hand out fliers, they are utilizing the connection between social media and their target audience to digitally “flier”.  The job now becomes not how many cars or hands receive a piece of paper, but how many friends say they are attending an event (and actually show up).  As a result, some “promoters” are entirely digital, meaning that employees have online persona’s with a pretty profile picture and guaranteed entry before midnight on their guest list in hopes to draw the most people possible to the event (and where their own profile does not appear to be spamming, and thus losing true friends).

“If we don’t think we can fill the venue with what we have planned, then the event shouldn’t have been booked in the first place.  We wouldn’t come to the owner (aka boss) with a show we don’t think would do well.”  Mitch says.  “Its all about managing friends based on their likes, location, age, past attendance etc.”

Overall, the digital promoter has many challenges in managing their customers and friends, and its a job only a few elite people can accomplish well.

Mitch Ross has worked as a social media promoter in Southern Ontario since 2009.  You can follow him on Twitter and Facebook for daily updates on his events.

Submitted by: Barry Rooke – SMBP Student University of Waterloo
To contact the author of this entry please email barry@infinitesm.com