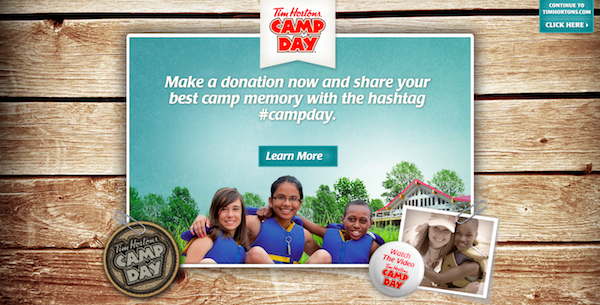 On Wednesday June 5th Tim Hortons and the Tim Horton Children’s Foundation teamed up to launch a nationwide effort to raise money to send kids to camps across Canada. The fundraising effort is based out of Tim Hortons stores. Social media was utilized heavily in 2012 with some great results and again is being used in 2013 to build up the story and customer engagement around the cause and remind people to visit the store on the day of the fundraising event.

Tim Hortons was founded in 1964, by hockey legend Tim Horton and who’ve been serving Canadians fresh coffee and baked goods for more than 40 years.

The “Tim Horton Children’s Foundation was established in 1974 by Ron Joyce, Co-Founder of the Tim Hortons chain, to honour Tim Horton’s love for children and his desire to help those less fortunate.”

Both organizations co-ordinate their Facebook presence to tell stories about children that benefit from the charity, engage customers in those stories through likes and comments, and thus spread throughout the large social graph of over 2 million people that like the Tim Hortons Facebook page.

An example can be found on a May 29th post in the Facebook Timeline with a photo of kids at camp and a reminder that Camp Day was a week away. That post received 10 comments and 912 likes which spread it well beyond just the Tim Hortons web page.

On Twitter Tim Hortons regularly tweets using the #campday hashtag and engage their followers encouraging them to visit a store that day.

Engaging customers through social media in order to drive them to an event can be an effective strategy to build awareness and allow people to share their support for a common cause. When coordinating with another organizations there are some good lessons to be learnt from the Tim Hortons example:

To contact the author of this entry please email at: cjmurphy@uwaterloo.ca