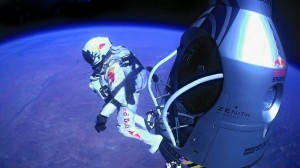 There is no doubt that social media is proving to be a useful tool for all types of companies. But the real question is, what deems a social media effort a “success”? What measurements are being looked at?

Last year, Redbull put together a project called RedBull Stratos that surrounded Felix Baumgartner, a skydiver from Austria. He had decided to jump from 128,100 feet in the air from a stratospheric balloon, in an effort to prove that man can survive the speed of sound in free fall. This amazing mission not only provided the world with valuable scientific and medical research, but it also provided Red Bull with an explosion of social media attention.

SocialBakers, a provider of social media analytic tools, created a report summarizing the social media metrics derived from the RedBull Stratos Project. Below are some of the highlights:

According to an article that discusses how social this project actually was, there was more than one hashtag used. This helped to increase the awareness of the campaign, as well as increased the amount of opportunity available for customers to become engaged. 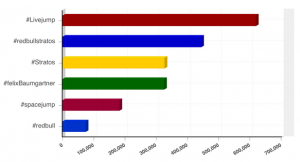 Based on these statistics, it’s safe to say that the campaign was successful. RedBull helped to create and maintain the buzz around this project, and in return their social media presence skyrocketed. Their customer engagement and awareness increased drastically. The results shown above prove that social media can make a difference for a company.

It’s pretty simple to start a Facebook page or a Twitter feed, but the difficult part is figuring out what is going to be done with the data received from these efforts. It’s important to determine beforehand what you want measured, how you want it to be measured, and what is going to deem the measurements successful. Looking at the results is important and can help a company to figure out their strengths and weaknesses, as well as help direct them on where to go next.

To contact the author of this entry please email at: jessicansummers@hotmail.com