At the height of the Charlie Sheen insanity, Comedy Central decided to roast the celebrity and join in on the #winning phenomenon.

With Charlie Sheen himself being a huge social media fan, this was the perfect event for Comedy Central to ramp up their social media efforts and test out the waters. Comedy Central publicized the roast with ads online featuring two Twitter hashtags: #SheenRoast (which people are still using) and #CrazyTrain. The TV commercials also featured the hastag #SheenRoast. They engaged social media users early and often to get them excited about the roast.

To add more excitement, Seth MacFarlane was announced as the Roast Master for the event which also created some buzz on Twitter. MacFarlane has a loyal fan base on Twitter that he pushed out info on the roast in his own special way… 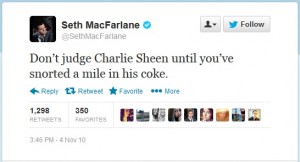 For the night of the airing, Comedy Central created a Charlie Sheen Dashboard (they had seen success with a similar tool for the Donald Trump roast). There were four main parts to the dashboard: 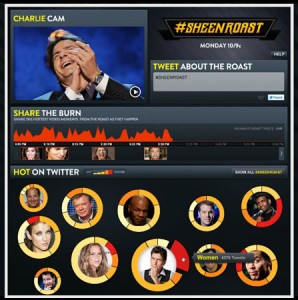 Roasters were interacting with people on Twitter during the show offering a play-by-play of what was going on up on stage. Roasters Twitter handles also appeared on screen when they were roasting Sheen for even more social media interaction opportunities.

After all was said and the roasting was done, how did Comedy Central measure the success of this social media experiment? Well, the Sheen roast had over 6.4 million viewers making it the most watched and highest rated roast in Comedy Central history. The roast easily beat out other shows on TV that night in social media traffic, namely Ashton Kutcher’s debut on Two and a Half Men. By using the dashboard online, the Sheen roast became a social media beast. There were 249,000 tweets around the Sheen Roast on September 19, including more than 118,000 during the 10:00 p.m. east coast airing – more than six times what the Trump Roast received.

As for use of the hastag they pushed in all their promotional materials, #SheenRoast generated more than 178,000 mentions. That was more than seven times what the #TrumpRoast hashtag had. Comedy Central also saw the highest traffic they’ve ever had to their website on the day of the roast. In addition to all of that, people continued to talk about Charlie Sheen and Comedy Central long after the credits rolled. All of these things mean Comedy Central can charge more money for TV commercials, online ads and sponsorships during future roasts.

Comedy Central took the tool they used for the first time during the Trump roast and modified it to use it for the Sheen roast. The tool worked fine the first time around, but obvious improvements were made to make the tool even more interactive. Comedy Central jumped on board the #CrazyTrain when it was already in motion and they took advantage of it by using the tool that Sheen fans followed him on: Twitter. By using the tool they already knew Sheen’s fans were using, they gained access to a huge pool of viewers and social media users that made this experiment a success for them.