On Wednesday, March 6, 2013, an unprecedented 13-hour filibuster, from Senator Rand Paul, from Kentucky, ignited a social media sensation using the hashtag #StandWithRand. Paul filibustered the nomination of John Brennan for head of the CIA. He opposed the nomination saying that Brennan was “a proponent of drone strikes on suspected terrorists.”

Paul started with 96,000 Twitter followers just before he started the filibuster and within 13 hours, the count with up to 141,000+. A total of more than 40,000 followers, that’s like 3,500 followers an hour! This filibuster became known to people who normally wouldn’t have communicated with Paul.  The hashtags helped create constructive conversation by multiplying thousands in one space. Hashtags are used to categorize messages (tweets) and help them show easily in a Twitter search. This enables any twitter user to click on the hashtagged word to view all other Tweets marked with that keyword. This social media strategy wouldn’t have been this year’s hit without the hashtags.

The strategy behind using hashtags, like #StandWithRand, is a “simple, powerful phrase that captures the emotion and significance of one heck of a long, important night.” Says Ericka Andersen, from The Heritage Foundation. Also, tweeting the important discussions throughout the evening helped those who weren’t watching the fillibuster to follow the latest news. Rand Paul became a social media hit!

Lesson for Others
Paul became a social media hit in less than a day. The TwitterCounter graph showed a huge spike in followers (see picture below). However, his social media team didn’t have any concrete structure in place to measure the success other than to note an increase in the number of followers. This is a common problem with many companies because it’s tough to track the return on investment (ROI). Paul’s social media team did a fabulous job in reaching out and creating awareness of the event. This strategy will need to continue and improve with the use to Google Analytics or some type of measurement to ensure his brand is accurate and his vision is maintained to create value in his filibuster. 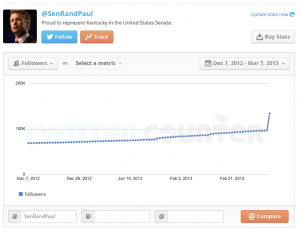 Rand Paul’s Filibuster Got Him Almost 3,500 Twitter Followers an Hour

Submitted by: Anna Nguyen – SMBP Student University of Waterloo
To contact the author of this entry please email anguyen44@gmail.com