February’s LinkedIn email blast left me with feelings of “I’m Special, I’m Special Not” reminiscent of plucking petals from a daisy whilst thinking of a childhood crush.  Like many, I received an email from LinkedIn stating that my profile was one of the 5% most viewed profiles for 2012.  Also like many, my day felt a little brighter as I thought “wow, I’m special!”.  I happily clicked on the yellow button to learn more – and realized I am one out of 20 million who received a similar message.   You can view LinkedIn’s infographic here. 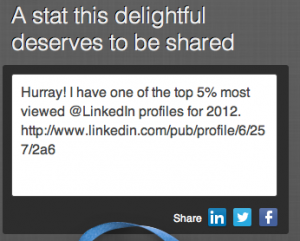 The internet is now flooded with reviews either admiring or despising LinkedIn’s campaign. The admirers (such as Kelly Clay) point out that LinkedIn cleverly utilized people’s desire to share accomplishments.  They engaged customers in marketing LinkedIn’s services by including a very easy to use Share feature, allowing many of the 20  million individuals to flood our social media streams with their self congratulatory notes. 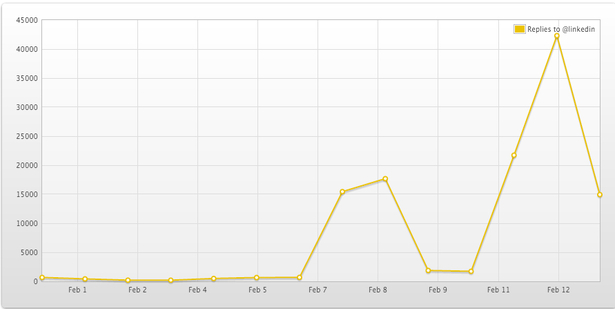 Judging by the above graph of replies to @linked in (from eConsultancy), this angle of the campaign was very successful.

Admirers also point out that customers will be more likely to upgrade to a premium account, in order to access the full list of their profile viewers.  Whether or not the campaign was a success from this perspective remains to be seen.

The despisers (such as  Jeff Zelaya), observe that being 1 of a crowd of 20 million is hardly anything to brag about.  They also point out that the 180 million who didn’t receive a message (but were bombarded by tweets from those who did) may not be happy customers.

Submitted By: Teara McGinn. To contact the author of this entry please email at: teara.mcginn@gmail.com.