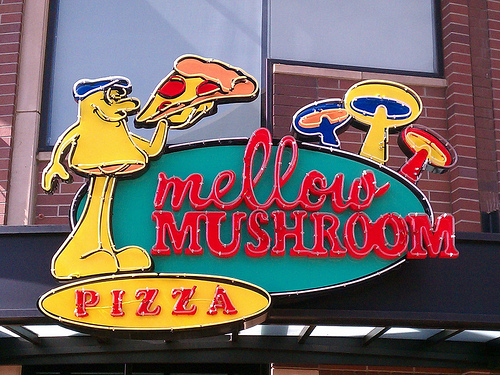 We have seen and heard about numerous social media campaigns that urge their fans to follow their company page or become a fan on various social media platforms. However, never have we seen a company following their fans or followers, LITERALLY!

Mellow Mushrooms, an Atlanta based pizza company, has just recently launched their very exciting and undoubtedly a very unique social media campaign where they encourage their fans and customers to like them and follow them on Facebook and Twitter, and in return Mellow mushrooms will help their followers and fans breakthrough the notion of internet anonymity by putting them into the spotlight in a fun and pleasant way  !

Now through November 11th, fans and curious consumers alike can go to http://www.FollowMellow.com and receive a free ½ order of pretzels, valid through November 30, and the chance to win free pizza for a year, by simply liking or following Mellow Mushroom. By participating in this opportunity, you might also be actually followed by Mellow Mushrooms.

The Follow Us and We’ll Follow You promotion also showcases a series of hilarious videos posted online. These videos feature the Mellow Mascots, Mel and Dude following fans throughout their daily activities: running, shopping, exercising and daily appointments.

It is my opinion that for any organization its brand Building strategy and social strategy are inextricably intertwined.  In the case of Mellow Mushrooms, due to its unique social strategy, its brand awareness have reached far beyond its intended target audience of prospective customers in Atlanta, Georgia.   As social media continues to prove its integrity as an important element of marketing in case of almost any organization, it is important for a brand to have a Social story to leverage the emotional and persuasive elements that make offerings even more successful.     In case of Mellow Mushrooms, they were able to communicate:

Mellow Mushrooms, unique social media strategy, is based on a common practice of liking a company page or following a company on twitter. This further emphasized my faith in something that the former CEO of Siemens, Klaus Kleinfeld has said:

“ It is not so much the uniqueness of your strategy that matters nowadays—it’s the strength of your execution!”

Mellow mushrooms has been able to implement their social media strategy in an excellent manner, taking something so common and turning it into something unique, where they were able to:

NOTE: For any information inaccuracy and or questions/concerns, please email them at wardahsdi@gmail.com