Despite a 600% increase in Ryanair‘s marketing budget, profits have dropped 29% after a negative blast on social media.

Suzy McLeod was charged €300 by Ryanair to print to print five boarding passes on a flight from Alicante to Bristol.  Whether or not people agree with the significant print charges from “no frills” Ryanair in August 2012, a complaint on a Ryanair Facebook page by Suzy McLeod created a significant impact.  Her Facebook post: “I had previously checked in online but because I hadn’t printed out the boarding passes, Ryanair charged me €60 per person! Meaning I had to pay €300 for them to print out a piece of paper! Please ‘like’ if you think that’s unfair.”  had over 20,000 responses and 500,000 likes.

Suzy sent a request to Ryanair for a refund of this extra charge, receiving the following response from Ryanair’s Chief Executive, Michael O’Leary; “She wrote to me last week asking for compensation and a gesture of goodwill. To which we have replied, politely but firmly, thank you Mrs. McLeod but it was your f**k-up.”

Ryanair’s lack of response and “damage-control” to a Facebook page can be associated to their 29% decline in profits this past summer.  Websites such as, I Hate Ryanair  and Facebook pages including Ryanair Sucks list daily customer complaints with no acknowledgement or “damage control” efforts from Ryanair. 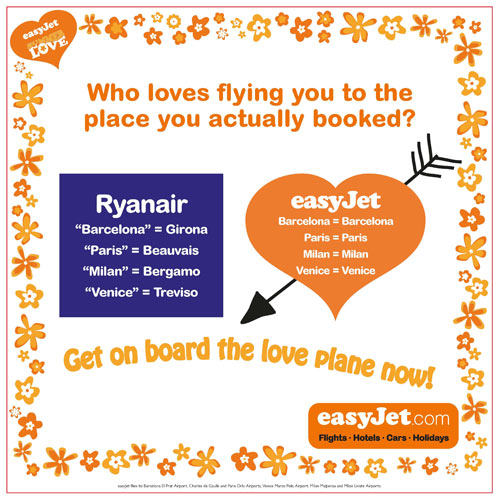 As a comparison easyJet (Ryanair’s competitor) reported better than expected results this last summer based on their new strategy of enhancing customer experience.  EasyJet has focused on responding to their customer’s comments and questions online, whereas Ryanair has been ignoring theirs.

Many consumers and customers no longer rely on “word of mouth” or a company’s website when making purchases.  Customers now also check Blogs, Facebook, Twitter and any other social media platform to learn or research a company.  Negative responses or reviews can be inevitable, as customers can not always be happy.  However the lack of response to these complaints online can be detrimental to business.

Because of the many social media platforms out there, many companies are now using Social Media Metric Tools, such as HootSuite and Google Analytics to monitor what is being said online about their brand, company or services.  If Ryanair had been monitoring these online conversations and responded, their recent profit decline may have been prevented.

Submitted by : Tara Busse, SMBP Student University of Waterloo
To contact the author of this entry please email tara.catherine.s@gmail.com