Groupon is a company that offers coupons and deals to its users on a daily basis. The premise behind Groupon is to use customer feedback to gauge demand for products and services. Interested parties purchase the coupon and only if enough people buy in does it become redeemable. This means the end users determine which coupons are redeemable and which ones are lost causes. Groupon reaches users via Facebook, mobile apps and daily emails and has over 500 markets it operates in.  These platforms allow the deals to spread virally and create further exposure for Groupon. Some could say Groupon creates a free market in the social media world, allowing deals to become subject to both supply and demand; this makes groupons a double edged sword for users as there is never a guarantee that there will be enough groupons available or enough demand to support its redeemability. 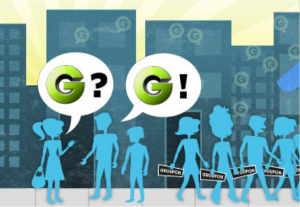 Social media has become really effective as a compass of social responsibility with consumers getting businesses to take a closer look at things such as work conditions at supplier factories and child labor issues. It has also helped companies understand what the market wants and has gone as far to help them define the look, feel and function of products. In this case, however, satisfying the end users has come at the expense of common sense. Groupon’s business model is too dependent on external factors based on the demands of consumers and the businesses they receive the coupons. In fact, many previous vendors have planned not to reuse the Groupon service as it has not provided the customer loyalty or funds they thought it would generate.

“Your restaurants are full packed with people who aren’t making you any money,” says Paul Evans, a Kansas City marketing executive who advises clients against using Groupon.

Groupon started in 2008 in Chicago and its popularity soon spread like wildfire. It was quickly labelled a “social media darling”, however, things soon turned sour as the honeymoon stage ended.  While the idea of “giving the people what they want” sounded appealing and economically feasible, in reality it has spiralled out of control. Furthermore, the Wall Street Journal has referred to the Groupon business as a disaster as it has continuously been hemorrhaging investor money. In order for Groupon to survive in the business world it needs to re-evaluate its focus and business strategy. While it prides itself on its social media strength and the ability to determine what the market wants, it would have to conduct extensive overhauls on how to make money for both themselves and their vendors.

A Bad Case of Grouponitis

Groupon Stock at an All Time Low

Is Social Media in Supply Chain Management a Waste of Time

Are You Ready For The Social Supply Chain?

To contact the author of this entry please email faisal.ahsan@hotmail.com