Can Justin Timberlake bring Myspace back? Justin Timberlake and his partners at Specific Media are trying to revive Myspace with a new design and added functionality. But can anyone save this social network that has seen its number dwindle to sites like Facebook, Tumblr and Twitter? The question has been on the minds of online observers, users and alumni since Timberlake and Specific Media co-owners Chris and Tim Vanderhook purchased Myspace in 2011 for $35 million-dollars, a fraction of the $580 million News Corps initial purchased price.

The new Myspace appears to be a bit like Pinterest, Tumblr, Facebook, Twitter and music streaming social sites like Pandora all in one. Instead of separating music, photos and videos, they’re combined in multimedia collections called mixtapes that place playlists and images side by side. Instead of friends, followers or like buttons, Myspace users “connect” – to another user, a song or other items on the site. Navigating from videos to tracks to friends’ updates is intuitive and seamless, with full-screen videos able to cleverly continue minimized playback in the site’s right-hand corner. Users can share outside content from YouTube and the like, but the Vanderhooks hope they’ll draw upon Myspace’s own sizable library. 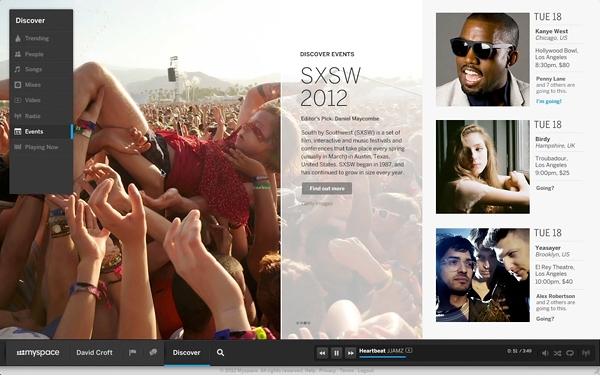 Myspace has always been a music centric social media site and the new Myspace is no different. The new Myspace sees itself as an artist-centric service focused around music. Music was crucial to Myspace’s initial popularity, providing a soundtrack to user pages and helping bring artists from the Arctic Monkeys to prominence. The new Myspace faces competition from services such as Bandcamp, Vevo, Pandora, Spotify and SoundCloud. Thanks to its pre-existing licensing deals, Myspace has access to a music library that rivals Spotify. It also doesn’t do anything that Spotify, Pandora, and Vevo don’t already do. But although Myspace offers a lot of functionality and a gorgeous new design, it doesn’t do all things well. For example, you can access higher quality music videos on Vevo, bring your Spotify playlist with you wherever you go and use it offline and Pandora’s had years to perfect its music algorithms. So how does Myspace stand out from the crowd and how will it compete?

Tim Vanderhook stated in an interview with ABC News, that“no one wants to manage another social network. We think it is unique and distinct, it integrates with Facebook and Twitter to be able to pull over your social graph and pull over your identity of who you are. We think Facebook is the uber social network that is supposed to be there. We think we built a great social network for artists. Similar to how LinkedIn built one for business, we think there is a huge gap that we wanted to fulfill. There is no point to compete with Facebook and Twitter.” 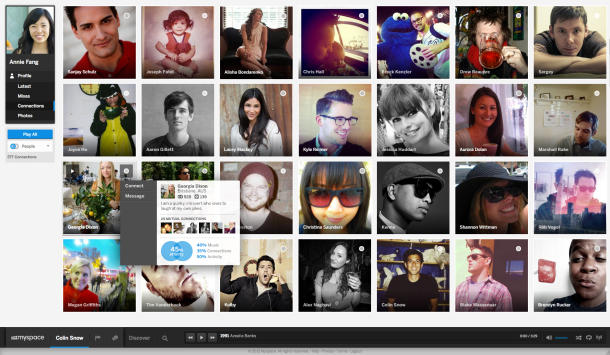 Myspace understands its niche and is already the home to 5 million unsigned acts, which is a nice base to start transitioning to the new Myspace. The new Myspace is currently in private beta and will start with artists, current Myspace users and eventually by early 2013 will be available to the general public. 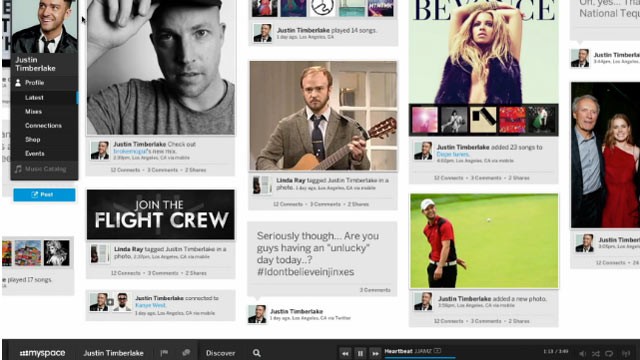 Lessons Learned
Whether the Myspace redesign will be a success is still to be determined, but the strategy used by Specific Media appears to have merit. Although, Myspace is still a multimillion-dollar company, Specific Media knows it can’t compete with its bigger competition Facebook and Twitter and they don’t intend to. Myspace has carved out a niche market of artists and has decided not to do a large launch event like most companies, opting to role out a private beta and slowly migrate more users to the platform organically.

“We never looked at this as some sort of rebranding or reinvention. This was for us a completely new platform,” Timberlake told a group of reporters. “The name was acquired but I think that was a good thing for us. The important thing up until this point . . . was to really give it an identity.”

“We tried to build a social network for the creative community to connect to their fans and for fans to have a great experience as well to explore and find out more about the artists they love” said Tim Vanderhook.

Myspace did retain a few of its most beloved features – a section for top 8 friends and a streaming profile song – which will please current Myspace users. The classic Myspace will co-exist alongside the new Myspace for the foreseeable future. To be invited to try the new beta you can sign up on the new Myspace website.

Submitted by: Kiyomi Rutledge, SMBP Student, University of Waterloo
To contact the author of this entry please email kiyomi.rutledge@gmail.com