Samuel Adams has been giving consumers an opportunity to create their own brew for years with contest like the Samuel Adams Longshot American Homebrew Contest. This year Zack Adams’ Magnificent Seven and James Schirmer’s Beerflower Wheat triumphed over nearly 1,000 competing homebrews to become the 2012 winners. Samuel Adams also uses their brew contests to reward their employees.  In addition to James’ and Zack’s winning brews, Samuel Adams employee Dave Anderson won the Employee Homebrew category with a Strawberry Lager. All three winning brews will be bottled and available nationally in the 2013 Samuel Adams LongShot Variety Six-Pack.

“I’m a total believer in crowd-sourcing. It brings great minds together that might not collaborate otherwise. The Samuel Adams Crowd Craft Project is exciting because it’s not only asking for input, but its educating people about what it takes to make a great beer. These brewers are extremely passionate about crafting something special and we are all going to help them do it,” says Guy Kawasaki, former chief evangelist of Apple and New York Times best-selling author. (Press Release) 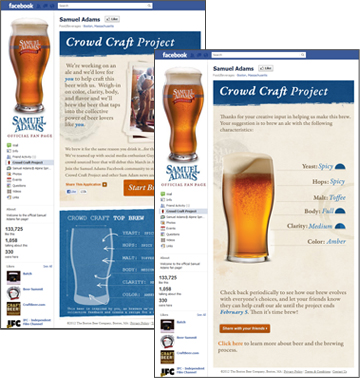 Consumers visited the Samuel Adams Facebook page to share their thoughts for the new beer. The Community was asked to weigh in on all aspects of the beer, including:

How the Crowd Craft Project Worked:

At the close of the crowd-sourcing period, the Samuel Adams brewers took the fan favourites from each category and used them to develop the recipe for the collaborative ale, which was brewed during the month of February 2012. The crowd crafted beer made its debut at Guy Kawasaki’s Girl + Guy party in Austin Texas in March 2012 as part of South By Southwest Music Interactive Festival. The beer was on tap in select bars throughout Austin and at the Samuel Adams Boston Brewery. Samuel Adams’ Facebook fans will be the first to know when this beer will hit new markets.

Lessons for Others:
Companies are learning how to tap into the potential of social media not only to strengthen their brands, but to create new products. Innovative marketers such as Coca-Cola, Threadless, 3M and Mountain Dew are not only using social media to promote a brand; they’re using it to create new products. Using Facebook, Twitter, Google+ and other major social media platforms, Samuel Adams not only gained valuable consumer research and developed a new beer but they also interacted with their social community and demonstrated that their consumer feedback was important to the company. Samuel Adams also understood that consumers are more mobile than ever before. By creating a dedicated Facebook application, they were able to reach a larger audience in a convenient format for consumers and easy to amplify with their own networks.

To contact the author of this entry please email kiyomi.rutledge@gmail.com