As the article suggests, when we think of McDonalds, the thought of fatty greasy food and minimum wage workers pop up in minds of most people.  However in order to combat such an image, McDonalds decided to experiment with Social Media in order to stimulate a more positive image of its brand name and products in the minds of people.

Choosing twitter as the social media platform of its choice, McDonalds invested in some hashtags to promote and highlight its use of fresh produce on a daily basis. It also inserted paid-for tweets into the streams of Twitter users with the hashtag #MeetTheFarmers, in order to encourage an image of a company who buys real fresh produce from real local farmers.

This campaign intended to run for 24 hours, seemed to be performing well until the hashtag #MeetTheFarmers was changed to McDstories. It was then that the after effects of having such a negative image in the minds of the people, actually started to spill. The hashtag was taken over by angry and dissatisfied customers who complained of their horrible food experiences at McDonalds.

“Ordered a McDouble, something in the damn thing chipped my molar. #McDStories,” @PuppyPuncher said.

“Hospitalized for food poisoning after eating McDonalds in 1989. Never ate there again and became a Vegetarian. Should have sued #MCDStories,” @Alice_2112 said.

“Watching a classmate projectile vomit his food all over the restaurant during a 6th grade trip #McDStories,” @jfsmith23 said.

Lessons To Be Learned:

Choose Your words Carefully: As apparent with this social Media disaster when launching a campaign words should be carefully chosen. For instance, #MeetTheFarmers instigated a more positive message in the minds of the customers who would be satisfied to know that McDonalds was buying fresh produce from their local farmers. Whereas, #McDstories provided a more open platform for customers to discuss their personal stories related to McDonalds. It was unlucky that the hash tag attracted more negative attention then positive.

Retain Control: It is the very essence of any social media campaign revolves that a brand name gives up a certain degree of control to its customers and hopes that their words encourage others to do business with them and reinstate customer satisfaction, However, since it is likely that the campaign may backfire and attract more negative attention then a positive sentiment, it is of utmost important that certain rules and guidelines are defined in a subtle manner. For instance, in the case of #MeetTheFarmers, the hashtag itself was reinstating a positive message where as #McDStories was a more open ended hashtag that opened doors for both positive and negative feedback.

In order to deal with embarrassment caused by the failure of the social media campaign, McDonalds once again took to social media to deal with its brand image. A campaign called, “Our Food. Your Questions,” was launched in June, where McDonalds customers were encouraged to ask questions about their food. 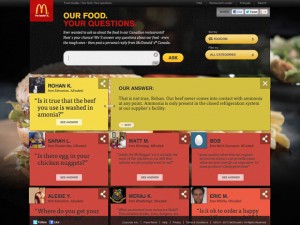 This campaign enabled many consumers to finally address the myths and ask those questions that had been lingering in  their minds for years regarding McDonalds.

The campaign so far has proved to be a great success as McDonalds has chosen to answer all questions that come their way. The honesty and transparency of the campaign have added a great deal to the success of this campaign.